Because He Lives, Sermon by Associate Pastor, Mark Hall 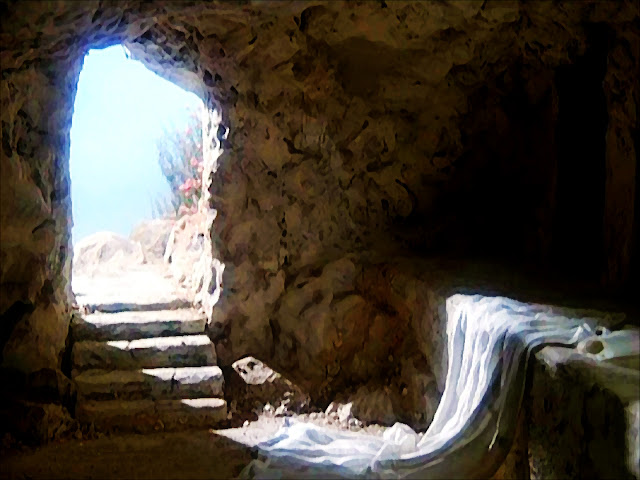 A few months ago I made a trip to the Credit Union to access our safety deposit box, looking for a vehicle title.  At the bottom of the box I saw an old blue covered document.  It was the deed to our little house.  I opened it and the words “Paid and Satisfied” caught my attention and delight.  The property was paid for to the satisfaction of the loan company.

But something else gave me pause on that afternoon, a spiritual truth about the Cross of Christ.  And that is this, Jesus’ death on the cross atoned for my sins.  He took my place on a cross I deserved, “pierced for our transgressions and crushed for our iniquities.”  I bring good news on this side of the Cross.  Once and for all Jesus died for our sins.  It’s been paid in full.


My earliest defining moment came in the Spring of 1965, Wednesday March 10 actually.  We were in a revival in the local church. I heard these words from the preacher spoken in the New Testament by the Apostle Paul;

Romans 10:9-10; “…the word of faith we proclaim is this…if you confess with your mouth that Jesus is Lord and believe in your heart that God raised Him from the dead, you will be saved.  For with the heart one believes and is justified, and with the mouth one confesses and is saved.”

I made a profession of faith in Christ on that Spring Wednesday night. On the following Sunday I was baptized, identifying with His death, His burial, and His resurrection.  You see, every first day of the week is Sunday, and every Sunday is a reminder we are an Easter people!  So church….Christ is risen…..He is risen indeed!

I never stepped back from that decision.  And as I grew in faith and understanding, I came to know that without the resurrection of Christ, we have no cornerstone, no lighthouse, no hope, no gospel, and worst of all we are still in our sin.

The scriptures help us understand the profound truth that Jesus died for our sins, was buried, and rose again.  How do we know this?

First…..The Old Testament reveals the truth that our sins separate us from God, we need a Savior, and Jesus’ is coming is prophesied and He will pay the sin debt.

Consider these truths in scripture:

Isaiah 7:14; 9:6-7; 52:7 and 53  He will be Pierced, Crushed, and Bear the Sin of Many
“For unto us a child is born, unto us a son is given; and the government shall be upon His shoulder, and his name shall be called Wonderful Counselor, Mighty God, Everlasting Father, Prince of Peace.  Of the increase of his government and of peace there will be no end, on the throne of David and over his kingdom, to establish it and to uphold it with justice and with righteousness from this time forth and forevermore.  The zeal of the Lord of hosts will do this.”
How beautiful are the feet that bring good news…

The Old Testament reveals the truth that our sins separate us from God, we need a savior, and Jesus is coming. The gospels tell us what the OT prophets proclaimed. Jesus was born and became Emmanuel with us. He followed John the Baptist in preaching repentance for the forgiveness of sin, was crucified, was buried, and was raised in accordance with the scriptures.

All Gospels agree Jesus fulfilled what the Old Testament showed us, and that is how to how to live, how to die, and how to live again!

The book of Acts proclaims who Jesus is. These disciples preached that He, King Jesus is Lord, He paid the penalty for our sin, by dying on the cross, was buried, and rose from the dead.

The Apostle Peter in Acts 2:22 ff
The fisher of the lake, a rash disciple____recommissioned after his worst hour, became a fisher of men says……
“…This Jesus God raised up, and of that we are all witnesses. (v 32)

Stephen in Acts 7, preached the longest sermon in Acts and brought home in one sermon the history and application of the life of Abraham and Moses, and Israel’s history culminating in the work of Christ.   His sermon did not save his life, but when he looked up towards heaven he saw Jesus standing, not sitting, at the right hand of the father as he was giving his life for the resurrected Christ.  Stephen was the first of what the Book of Common Prayer calls “the noble army of martyrs.”  Early church father, Tertullian,said, "the blood of the martyrs is the seed of the church."  Peter and Stephen proclaim who Jesus is.

And we are not finished…..

It is said a “convicted man sometimes contrives to crush conviction in fierce activity.”   So was the case of Saul of Tarsus who gave the go-ahead to stone Stephen.  The fanaticism Saul exhibited as chief executioner in the early church exposed his inner conflict and secret doubts, as fanaticism usually exposes. After his encounter with Jesus on the road to Damascus, this is his testimony in I Corinthians 15 that has become the signature Easter sermon for all times.   Here he pens these words:
I Corinthians 15:3-19:

3For I delivered to you as of first importance what I also received: that Christ died for our sins in accordance with the Scriptures, 4that he was buried, that he was raised on the third day in accordance with the Scriptures, 5and that he appeared to Cephas, then to the twelve. 6Then he appeared to more than five hundred brothers at one time, most of whom are still alive, though some have fallen asleep. 7Then he appeared to James, then to all the apostles. 8Last of all, as to one untimely born, he appeared also to me. 9For I am the least of the apostles, unworthy to be called an apostle, because I persecuted the church of God. 10But by the grace of God I am what I am, and his grace toward me was not in vain. On the contrary, I worked harder than any of them, though it was not I, but the grace of God that is with me. 11Whether then it was I or they, so we preach and so you believed.
12Now if Christ is proclaimed as raised from the dead, how can some of you say that there is no resurrection of the dead? 13But if there is no resurrection of the dead, then not even Christ has been raised. 14And if Christ has not been raised, then our preaching is in vain and your faith is in vain. 15We are even found to be misrepresenting God, because we testified about God that he raised Christ, whom he did not raise if it is true that the dead are not raised. 16For if the dead are not raised, not even Christ has been raised. 17And if Christ has not been raised, your faith is futile and you are still in your sins. 18Then those also who have fallen asleep in Christ have perished. 19If in Christ we have hope in this life only, we are of all people most to be pitied.

On the other side of the cross the epistles are the letters to the early church, mostly comprised by Paul.

The book of the Revelation says He’s coming again!

The early church moved the Sabbath from Saturday to Sunday.  Why?  Because they identified with the risen Christ whom they knew was raised by eye witness accounts.  I don’t know if you ever considered this, but when you drive up to worship on Sunday morning, you, in fact, identify with the resurrection of the risen Lord.

Every date in history is a reference to Easter Sunday.  Every time you date a letter, write a check and date it, or fill in the year on a document, it is connected to the resurrection of Jesus.

·     As Jeni spoke about Wednesday night, many we know are risking their lives today because of the gospel of Christ.

I gave you my testimony when I came to Christ.
Our sins are paid in full at the cross.
The old and new testaments exalt Christ.
The epistles instruct the church in it’s mission.
The Revelation is clear He’s coming again.

Job of the Old Testament asked a question.  “If a man dies, will he live again?”  Jesus answered that question in the New Testament  “…..because I live you also will live.”