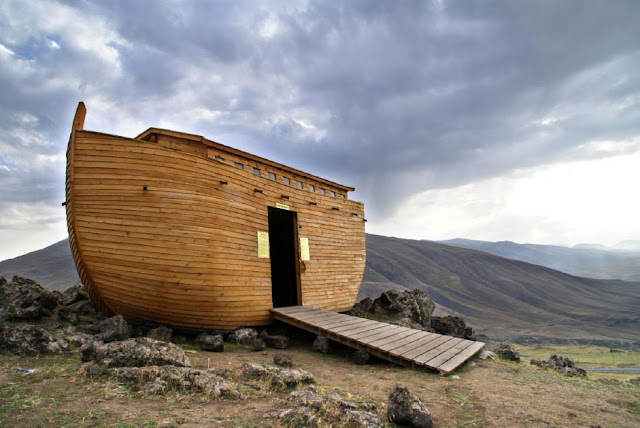 The Bible is filled with great heroes of faith.  Hebrews 11 names many of these heroes and Noah is one of them.  Noah lived in a time when lots of people were not following God.  Last week we looked at the condition of humanity, people were made in God’s image but they chose their own way.  It was the same in the time of Noah.  People were going their own way.  Noah was different and he is an example of how we can be different.  We too can walk with God even though we live in this world where many don’t walk with God.  Noah didn’t start walking with God when the floods came.  He was walking with God long before.

Walking with God prepares us for the chaos of life.

Times in life will be uncertain.  If we have a foundation and are walking with God when chaos hits, our foundation helps us make sense of what’s happening.

So many people were choosing their own way and the word corruption, that means “ruin,” is used 5 times in this passage.  This was the condition of the people on earth at that time.  This term is also used to describe a damaged garment, one that’s no good anymore.  Men, I don’t know about you, but sometimes I wear clothes until they fall apart!   The earth was filled with violence.  When we choose to go our own way this produces violence.  This word violence is also used to describe not being sociable, not being a good neighbor, and not caring for those around us.  It’s describing self-centeredness.  This describes the treatment of people that are in a weak position, like those in poverty.  We stop caring about those on the fringes of society.  They did not care about other people.  Corruption in this culture created a dark backdrop.

9These are the generations of Noah. Noah was a righteous man, blameless in his generation. Noah walked with God.

We have some people who are a bright light in darkness.  If this is said about us it’s the greatest compliment we can receive, that we walked with God.  Noah walked with God.  This was only said about 2 people in the Bible.  Noah is one of them.  Verse 9 describes Noah.  The word ‘righteous’ here is a legal term that means legal innocence.  What’s this mean?  Does this mean Noah never did anything wrong?  No.  It means he was declared righteous legally just like we are declared righteous because we walk with God, not because we haven’t done anything wrong.  When we sin the Holy Spirit convicts us.  What Jesus did on the cross is transferred to us and we are declared righteous before God.  Noah was walking with God.  There’s grace here.  When Noah went the wrong way he was restored.

‘Blameless’ means to be whole or complete.  Noah was whole and complete.  Many in his time were empty, going through life without allowing God to do His work.  Blameless was a term that was generally used for animals meaning ‘without blemish.’  In Deuteronomy 18 we are all called to be blameless before the Lord.  Moses declared this:  you’re to walk in the ways of the Lord and be blameless.  We are called to wholeness and completeness.  This is a gracious act where we listen to God and allow God to speak into our lives.  It is God that makes us whole and complete.  There’s a contrast here between Noah and the people.  What happens when light is introduced to darkness?  Everything is drawn to the light.  For example, I recently bought a new alarm clock.  I plugged it in and it seemed fine in the daytime, but at night it was so bright I had to unplug it to sleep!  It didn’t seem that bright in the daytime.  You may be overwhelmed by darkness, but God still calls us to be blameless.  When chaos enters our lives we are called to be different.  Noah’s family stood out.


God has a plan for restoration from brokenness.

We cannot control our circumstances.  In brokenness we can see God’s plan.  2 Peter 2:9 Peter refers to how God knows how to rescue the godly from unrighteousness.  He is describing the ark.  When we pray and think about walking with God we pray God will keep us from uncomfortable, bad things.  This is not an unfair prayer.  In Scripture God sees us through bad circumstances and we are able to face the dark times in our lives.  God will bring restoration out of brokenness.  You already know the story of the ark and what happened.  God has a plan for restoration.  Think about this in your life.  God had a plan for Noah and God has a plan for you too.

14Make yourself an ark of gopher wood. Make rooms in the ark, and cover it inside and out with pitch.

What’s an ark?  This word is only used two times in two significant Bible stories.   It means ‘a box that will float.’  Noah was to build a large floating box.  We have to remember there weren’t any ships yet in this time period.  The other place this term ‘ark’ is used is when Moses’ mother builds an ‘ark’, or a box and places Moses in it to save his life.  Many translations use the word ‘basket,’ but it’s the same word.  Sometimes what God calls us to do is something that hasn’t ever been done before.  It can be what God will do in your life.

18But I will establish my covenant with you, and you shall come into the ark, you, your sons, your wife, and your sons’ wives with you.

This is the first time in the Bible we have the word ‘covenant.’  They’re going to be protected in this great time of chaos.  It will be a difficult time but they will be ok.  God knows this will be the worst thing they’ve faced in their lives but God is with them and they will make it through.  God is present in the chaos of life.

19And of every living thing of all flesh, you shall bring two of every sort into the ark to keep them alive with you. They shall be male and female.

God’s plan is for Noah to bring two of every creature.  If this wasn’t fun, I don’t know what is!  You basically have a zoo in a box that can float!  We don’t know the details of how this happened.  We don’t know all the answers to our quesiotns, but I do have fond memories of this story from my children’s Bible.  In the pictures all the animals are in line together walking 2 x 2 into the boat.  This is the craziest thing in the world!  Imagine God leading you to do something like this!  God gives tremendous vision to Noah.
We can trust God.

Sometimes God gives us a vision or a plan that seems crazy. In Genesis 7:5 notice the simple obedience of Noah:

22Noah did this; he did all that God commanded him.

5And Noah did all that the Lord had commanded him.

Will God ask you to do something that seems impossible too?  We’ve all heard the saying that, “God will never put on you more than you can bear.”  This is NOT in the Bible!  Yes, God will put more than we can bear upon us, impossible things, impossible tasks, but Noah is still obedient and God walks with him!

Here’s a preschool version of this as an example.  How might we tell this story to preschoolers?  Maybe something like, “God told Noah to do it, and Noah did it.”    The difficulty is simply doing what God says to do.  Let’s say we’re in class and it’s time to go so we ask the preschoolers to put away the toys because it’s time to leave.  The preschoolers would understand what we’re saying but when we tell them what to do they loose the ability to function.  They don’t want to pick up their toys and leave.  There’s truth in this passage in verse 22.  Noah heard what God said and he did it.  This is simple, total obedience.  We obey as an act of faith.  When you’re in a dark place and you’re not sure what to do, God calls us to be a light.  God calls us to simply obey and to simply trust.  Is God calling you to build an ark?  Is God calling you to build something in the midst of your circumstances and your life?  God says you will be ok and He will walk with you through this.

God, we pray for this kind of faith.  God, may we trust You and walk with You. In Jesus name, Amen.